Levy Baltazar is an all-around fantastic Meisner teacher! He is passionate about the craft of acting, fully present with each student, and has a wealth of knowledge that he's eager to share. As a former student of Jana Lee Hamblin, I very much appreciate that he is teaching Meisner in a style that closely follows her unique methodology. Levy also has a warmth that puts you at ease, while still pushing you to become a better actor. I look forward to studying with him more! 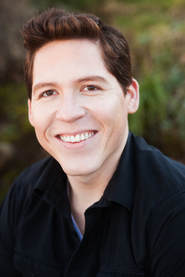 Levy has been an actor for over half his life and discovered his passion from the moment he took to the stage in middle school. He continued with theatre throughout high school and college where he attended Northern Arizona University (NAU) and received a degree in Theatre with an emphasis in Performance.

​After graduating and moving to Portland over three years ago, Levy has been studying intensively at the Act Now Studio with Jana Lee Hamblin in the Meisner technique. Levy went on to become an instructor at Act Now Studio teaching Meisner and On-Camera classes as well as teaching at Katie O'Grady's studio for Kids and Teens. ​We are pleased to have him at Vision8Studio! Outside of teaching, Levy is focused on film, television, and commercials and you can find him in many local projects. ​

Tonight I went to Vision8Studio's Meisner class taught by Levy Baltazar and I was impressed. The studio was absolutely beautiful and I would highly recommend taking a class from this studio. If you're looking to learn Meisner in an inviting environment this is the place to be.

Levy Baltazar is a fantastic Meisner instructor and Vision8 is a wonderful studio! Highly recommend.

I say DITTO to Christie's comments. I had a great 1st time experience. Levy's guidance for me as a 'novice to the Meisner technique ' was wonderful. Wow talk about opening your eyes to another approach in acting!