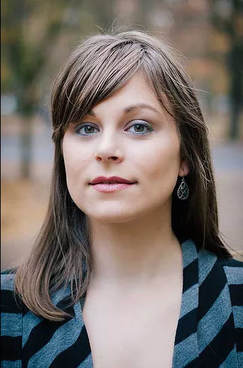 She will be directing "Once Upon a Mattress" with MPAA this fall and "The Odd Couple" with Sherwood Foundation of the Arts this Winter.

Currently, outside of her classes at Vision8Studio, she privately coaches voice, flute, acting, acting for singers, public speaking, and tap dance as well as instructs larger Master classes on Auditioning and Acting.

Visit her website: click here
Kristin's CV: click here
​​
​FAVORITE ACTOR: Alan Richman and Patrick Stewart
FAVORITE ACTRESS: Madaline Khan and Dame Judy Dench
FAVORITE FILM: Mel Brooks' Young Frankenstein
FAVORITE TV SHOW: Anything Star Trek except Enterprise
FAVORITE PLAY: Rhinoceros by Ionesco
FAVORITE MUSICAL: Currently, my friend Ernie Lijoi's Under the Influence, all Trumped up
FAVORITE ACTING TECHNIQUE: Mashing them all together in a melting pot of awesome acting stew!
WHAT MOTIVATES YOU? Creativity, community, and collaboration.
WHAT DO YOU LOVE MOST ABOUT TEACHING? Light bulb moments.  That moment where something you have been harping on finally clicks and the student pauses and gives you that look of inspiration.
BEST QUOTE YOU'VE EVER HEARD: "Life isn't about finding yourself.  It's about creating yourself" George Bernard Shaw
YOUR DREAM ROLE IS: Right now,  Trina from Falsettos
​
​
​