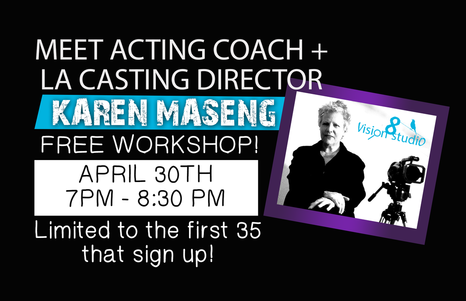 ​Sign up for this Free Workshop using our Live Google Doc: click here
In this workshop - meet Acting Coach and LA Casting Director of POGO Casting Karen Maseng! Learn her methods for both on-camera and off-camera acting, including the answers to the questions:
What is an action choice? What is an intention?
Karen Maseng began her career as an actress. Los Angeles offers actors access to some of the best teachers in the business, and Karen took full advantage of those opportunities.

"I've worked as an actress for many years and I have studied with many wonderful teachers. Karen's techniques helped me build confidence. Her exercises are a revelation. She cuts through, simplifies and helps you get specific, and specifics get you jobs."
- Zilah Mendoza, Actor